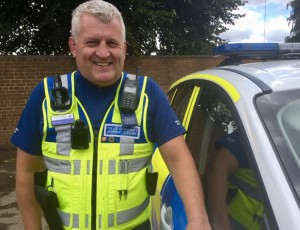 A resident of the Borough of Northampton, Paul transfers to us from the rural beats of Kettering and Corby. He was a sponsored officer for Kettering Borough in his earlier days, has worked briefly on the south-west sector of Northampton and has been a PCSO for fifteen years. He has completed 23 years in public service, having served for eight years as a prison officer at HMP Wood Hill, working with the prison’s most challenging inmates in this high-security environment.

Paul is a keen Rugby enthusiast having played in forward positions for the Men’s Own Rugby Team as well as for the police and the prison service at local and national level.

He is qualified to drive the majority of the force’s vehicle fleet, including the mobile police station, off-road motorcycles and pedal cycles.

Paul applied for the new role sponsored by the Spratton Ward, following extensive consultation and work by Cllr John Shephard from Daventry District Council. Travelling from Northampton to the Desborough Police Office most days, he says that he has always had an interest and penchant for the Brixworth beats and our Daventry District villages.

As he finds his feet, we will be working on getting him as accessible as possible, working out how you want to contact him and how you want him to contact you. He will be trained on Neighbourhood Alert and will be signing up for a Twitter account in due course.

In my initial meeting with him I have said that I want him to be accessible and visible. This will include being known by name and sight across your parishes with a strong input from sponsors, brokered through me, on what your priorities are for his policing role within his powers and responsibilities.

I am sure you will agree he is a worthy and welcome addition to our community and the policing team based at Brixworth, and having met him, as a local resident and his sergeant, I am delighted and excited at his appointment.

Thank you for the perseverance and commitment shown by your council towards the community safety of our District.

Paul tries to visit all six stakeholder villages every day he is on duty. He is planning a crime prevention evening in Chapel Brampton at the school and will be visiting with the MPS (mobile police station) soon. Paul is very approachable and would love to meet you when you see him in the village and in our area.

We are hoping to get an off-road motorbike from the Police’s existing stock for Paul and other officers to use. It will be stored in Brixworth and make it possible to access more areas more rapidly.